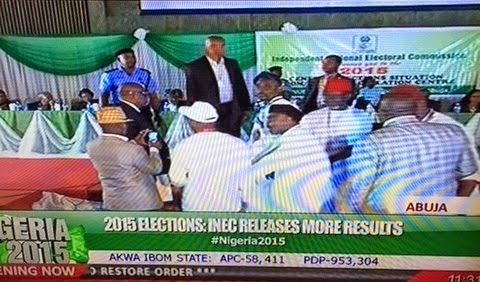 The PDP party agent at the Collation center in Abuja, Elder Godswill Orubebe is currently staging a protest at the INEC result collation center alleging that Prof Jega has been compromised. According to him, Professor Jega has been selective, partial and is tribalistic. He said APC had written a letter to INEC concerning an alleged rigging in Rivers state which he immediately sent a committee to investigate the issue but that when PDP wrote protest letters on the elections in Katsina, Kaduna and Jigawa, Jega did not send anyone to attend to their protest.