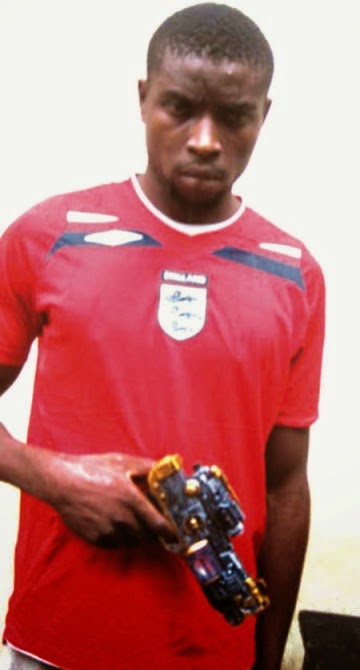 Luck ran out on a suspected car snatcher in Lagos, Emmanuel Chukwunonso, who was arrested by the police after the stolen vehicle had a fault.

Punch Metro learnt that Chukwunonso was nabbed by
the Maroko Police Division in the Lekki area of Lagos after he and another gang member, identified simply as Chima, allegedly snatched a Honda Accord. It was gathered that Chima, however, was still at large.

According to the police, the two suspects snatched the vehicle marked, EK804LSD, at gunpoint but the vehiclehad a gear problem not far from the robbery scene.
Our correspondent learnt that while Chima fled, Chukwunonso was caught and initially beaten by a mob before the police arrested him.

Twenty-four-year-old Chukwunonso said he was formerly selling Indian hemp in Imo State before he came to Lagos.

, “When I came to the Lekki area of Lagos, I took up work as a security man. I was paid N25,000 monthly.
“After I was fired from the security work, a friend, Chima, and I decided we were going to rob and get money to solve our problems. It was on February 23 that we snatched the car.“Two ladies were inside the vehicle. We accosted them and pointed a gun at them. They both jumped out and took to their heels. It was a toy gun.
“As we fled, the vehicle began to give us problems. It had a gear problem.As I alighted, a crowd swooped on me, but Chima escaped.”

Our correspondent learnt that the police were on the trail of the other suspect, while the stolen Honda Accordhad been returned to its owner ─ a woman identified simply as Agonoma.
Posted by Unknown at 3/24/2015 06:14:00 am