13 Types of Relationships: Which One Are You

Our relationships are unique to us and also unique in the way they annoy our friends. Figure out which relationship type yours is and how your friends see you.
There are so many types of relationships… really, there are a lot. They range from the rom com version and the foodies to the cos-players, even to that annoying couple that somehow always manages to throw the perfection of their magical union in your face…WE GET IT, YOU’RE IN LOVE! But the death defying loop question we must all ask in our lifetimes is which relationship type am I? And exactly how much do I irritate my poor defenseless friends? 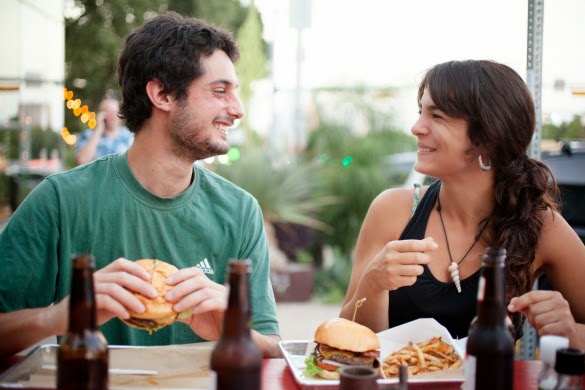 This couple lives on the couch watching Masterchef; if they are not on the couch they’re in the kitchen baking up a storm. Naturally, there is nothing wrong with food, especially seeing as they always have an abundance of it and they’re willing to share. Also, I’m a massive fan of stuffing my face.

The oh so cruel reality is that this couple can’t cook and while they rant and rave about the new “infusion of flavors” that they’ve just discovered, you’re trying to politely spit out your mouthful while secretly feeding their dog your so called ‘food.’ 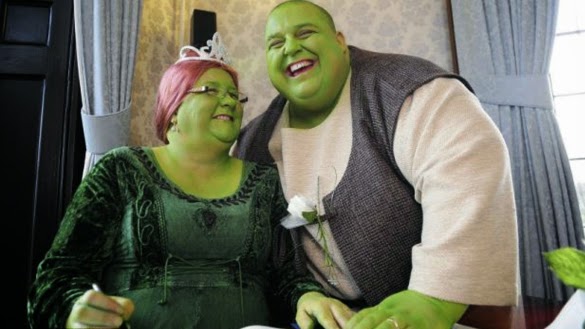 Source: via youtube.com
The relationship category I happen to fall in. We are humans by day and magical creatures by night. We attend comic conventions and dress up like characters from books. We are the epitome of geek, we prance about on our wooden horses and shiny capes and we LOVE IT! We bore our friends with endless details about the makings of our new costumes and the competitions we’re going to enter.
Sadly, our non-cosplaying friends must suffer through all the supposedly mind numbing details of our endeavors. Our friends tell us we annoy them, I say we’re enlightening them.

This couple is surrounded by pure bliss, they use pet names like honey bunny, baby cakes, and the truly cringe worthy, snuggluffagus… yes that’s a real one. All the while they talk using that coochy-coo baby voice, as if they were babies trying to sooth each other. They’re constantly holding hands and making goo-goo eyes at each other, all at the expense of their endlessly suffering friends.
They’re constantly proclaiming their love and at times they do quite literally declare it from the roof tops, in the dead of night, to the dismay of their neighbors…all in a day’s work. They are the very definition of a teenage love story, even though they’re usually grown adults. What I can say is that when you’re hit by cupid, you quite literally lose your mind.

This couple is the adult version of the lovey-dovey couple; they are constantly enthralled in a heavy make out session. I have this theory that their mouths are drawn together, despite the resistance of their owners. When finally their lips do meet, even though it is against their will, they just go with the flow and enjoy the experience. Doesn’t matter that it makes everyone near them uncomfortable, who cares they’re in love! But they truly don’t care!
They need to demonstrate their love for each other, why they don’t do it in the privacy of their own homes is beyond me. Admittedly, if you can get over your prudishness, close observation of the couple may actually teach you a new thing or two, or three or nine. Happy tutelage!

This is more of a couple which consists of one sane individual and one slightly unhinged individual. As one of them sits comfortably on the couch minding their own business at home, the other one suddenly appears, plops down beside them and begins playing with their hair. Which isn’t too extreme but then they start moving down to your ears and playing with them, which is also ok.
The problem lies with when they decide to lose whatever sanity they previously possessed and start squishing your face while telling you how cute you are. 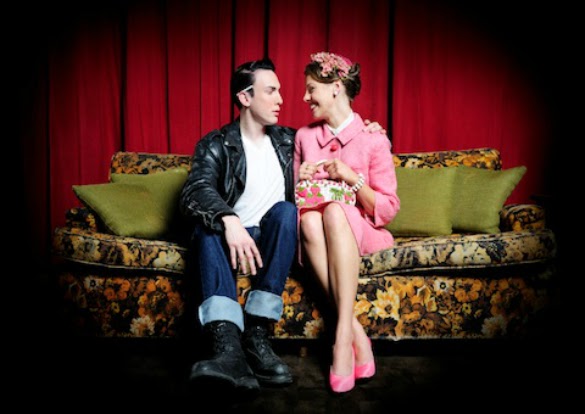 This couple has absolutely nothing in common, the fact that they’re together is akin to seeing a unicorn in the wild. They don’t share the same hobbies or interests, if one is short the other is of gigantic proportions, if one is a geek, the other is the very definition of suave. Why these people are together will never make sense to me.
Admittedly, they do give me hope, because if they can make it, then all our relationships have a fighting chance. There is also the plus side of constantly knowing the opinion of your partner, if B1 says they hate something, you can count your lucky starts that B2 loves it. I like to think you can pretty much gather as much information about one of them as you like, by simply talking to the other one. It’s almost like a twisted game of espionage.
Why this technique would ever be realistically useful is beyond me, but please, if you’ve used it before, let me know so that I know that I’m not alone.

The fetish loving couple loves to try new things in the bedroom, now there’s nothing wrong with spicing up the love life by introducing some new elements. The problem is when people tell you what they’re getting up to; truly there are some “elements” I wish I never knew about.
This is a true story: I was once listening to the radio and a segment about fetishes was on, a woman called in and told us that her boyfriend loved to hold her down, pry open her eye lids, and lick her eye balls. You see he loved the taste; apparently eye balls taste salty like tears…who would have known.
Hey, if that’s what you’re into, I respect that. Just ignore the look that comes over me when I come face to face with your extracurricular activities. I am simply a tame individual.

The two people that comprise this relationship are no longer separate entities. They have been together for so long that they are now one single person. They like the same things, they share identical ideals, and they even finish each other’s sentences. The couple, or rather the single person they have become, is pretty eerie in their similarity.
When you inform them of their oneness, they seem to take it as a compliment…which was not the way it was intended. Also, they possess a spooky power of always being together: where you see one of them, the other must be somewhere nearby. I’ve always wondered what would happen if they stayed away from each other for only an hour, my guess is that they would just disintegrate into nothing. Note to self: it is best not to test out this theory.

This couple is obsessed with a single topic, be it a TV series like Game of Thrones or a game like Dungeons and Dragons. It doesn’t matter what the object of their attention is, they are well and truly infatuated to the point of insanity.
If we were ever to have the misfortune of uttering a single word against their one true love… we should prepare for death. They would be furious, they would be so mad that the little vein on their temple would begin to throb and their faces would turn bright red. It’s best to avoid mentioning their fandom in case you accidently offend them.
The problem is you can’t avoid talking about their fandom because that’s all they talk about, they are constantly reminding you of how you should watch their show or play their game. You, on the other hand, are stretching the limits of your imagination by thinking up new and creative ways to avoid the continuous invitations, my favorite excuse is:
Them: You should come play this game with us!
Me: Oh, I’m sorry. I’m really busy.
Them: But we didn’t say when…
Me: I’m busy all the time. In fact, I’m busy right now, see ya.
If you know a couple like this, then I wish you all the best in fielding their constant advances and tolerating all the unnecessary references to said fandom. 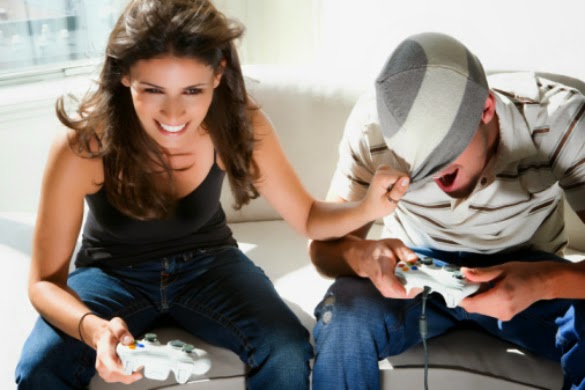 The natural habitat of this couple is on the couch watching the latest game, doesn’t matter which sport it is, they’re watching it beer in hand and pretzel to mouth. When they invite you over, be prepared for a night of fun, by fun I mean intense yelling at the TV because the little man inside the magical box failed to kick the ball.
I can guarantee that at least once during the night something will be hurled at the TV. I hurt for the TV. On the plus side, you are always provided with an assortment of snacks, this makes all the verbal abuse that substitutes commentary worth it.

This couple is consumed with the need to know what the other one is up to at all times. They go to truly extraordinary lengths. They check their partner’s texts and photos when they’re not in the room, they stalk their Facebook profile, making note of every like. They live for Twitter and Instagram posts.
All in all, this isn’t that bad. It becomes so when they start physically stalking their partners by suddenly appearing at their work to give them lunch, when they really want to make sure that they’re still at work. When asked why they do this, they say they want to make sure that their partner isn’t cheating and that they really love them. But wait, it gets worse; sometimes they even recruit you.
A poor soul once told me that they were forced by their friend, let’s call her Amy, to prank call her boyfriend, let’s call him Luke, and to tell him that Amy was in the hospital. You see Amy, like the unhinged person that she is, needed to know how Luke would react so that she could know if he truly loved her. Let’s all promise ourselves that we won’t get to this level of crazy. If you’ve already done this, then there is no hope for you, go forth and continue to be your uninhibited self.

Source: via tumblr.com
This pair LOVES pranks, they are constantly playing inventive pranks on each other. You’re constantly laughing at their antics and all their creative strategies. However, the problem lies with when they believe that it’s an absolutely great idea to play a prank on you. The classic is to run up behind you and violently shake you, which always produces a scare.
I am constantly worried about where the next attack is coming from, not only that; I’m worried about the crying wolf situation. I imagine that someday someone will grab me and I won’t be scared, only to turn around and find a serial killer. Sure, it’s unlikely, but one has to be prepared. So for all the pranksters out there, I love your antics, in fact I love them so much I’d like to appreciate them from a far.
Naturally, there are many more types of couples, so which relationship type would you add? Let me know which annoying couple you are, and how you manage to get on your friends’ nerves. I’m looking forward to reading the stories.
Posted by Unknown at 3/19/2015 06:42:00 pm