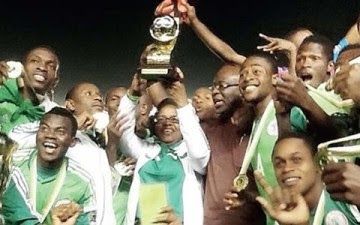 The Flying Eagles of Nigeria on Sunday defeated Senegal 1-0 to win the 19th CAF U20 Youth Championship.
Manu Garba’s team never looked in danger of being second best and they confirmed their class in the 18th minute when Bernard Bulbwa swivelled after collecting the ball in flight with his stretched leg, and fired a thunderous volley which beat keeper Sai of Senegal.
Senegal almost equalised two minutes later. Siddy Saar’s skill and prodding legs almost got his Senegal side an equalizer.
A free kick went to Senegal. Siddy Saar expected an assist from teammate but he went for glory. Obinna Nwobodo was then fouled and stretched out.
Senegal had their fair shots of the ball possession but the Eagles repelled several attacks by the Senegal side whose crowd supported them even when the goal failed to come.
The Eagles held on to claim victory. Ghana’s Yaw Yeboah was voted the Orange Man-of-the-Tournament.

Ghana had beaten Mali 3-1 in the third place game.

Senegal  faced Nigeria in the final of the 2015 Africa Youth Championship (AYC) after they beat Mali 2-1 to win the second semifinal on Thursday.
The hosts went into the semifinals as the second-placed team in Group A but that did not count for much when they met Group B winners Mali.
The Nigerians beat Ghana 2-0 in the first semifinal on Wednesday to earn their place in the final which will be played at the Stade Leopold Sedar Senghor in Dakar.
Posted by Unknown at 3/23/2015 01:58:00 am