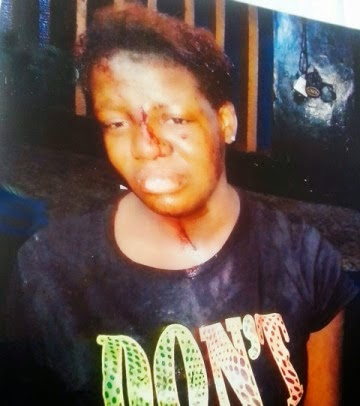 The Lagos state police command have arrested 20 year old hairdresser, Gift Wahab pictured above for stabbing her live-in-lover, 28 year old Ebi Amade to death following a disagreement over feeding allowance at their home at Fasasi Street, Ajegunle, Apapa, on Thursday, March 19.
According to a report by Punch, Gift, a native of Uromi in Edo state had been living with her Bayelsa born lover since 2013 after she dropped out of school following the death of her father. On the day of the incident, the couple, who had a child that later died in December 2014 after a brief illness, fought as they returned home from an event. 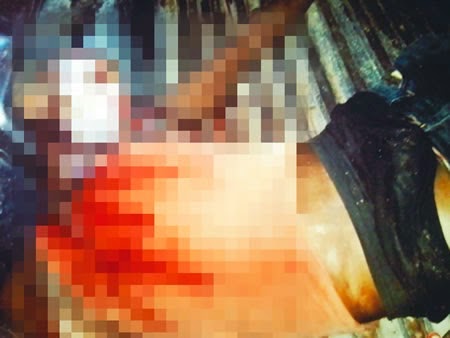 "On Thursday, we went out for an event. As we were returning home, I said he should hand me the key to the house and my feeding allowance, but he said no. He explained that he had no money for our feeding. Then he started to abuse me. I told him I was going home, and that he should not bother about the money again. That was how he punched me in the face and attacked me while we were still on the road. I left him and went to look for a hammer, which I used to break the door. That night, when he came in, I was still angry. I got a knife which I used to stab him. I didn’t intend to kill him. I was just annoyed over what happened in the afternoon.”she said

Neighbors immediately alerted the policemen at the Layeni division and she was arrested.
A police source who spoke on condition of anonymity said the couple met at a night club

"The couple met each other at a night club in 2013 and had been dating since then. They were not legally married. They went out on Thursday and probably got drunk in the process. When they returned, there was an argument and a fight began. The suspect ran to the kitchen and grabbed a knife. She stabbed her lover in the right side of the neck, and he was rushed to a hospital, where he died.”
The Lagos state Police Spokesperson, Kenneth Nwosu also confirmed the incident and said further investigation into it is ongoing.
Posted by Unknown at 3/23/2015 01:34:00 am