Remember the Indian students whose parents climbed a wall to help them cheat? 600 of them have been expelled 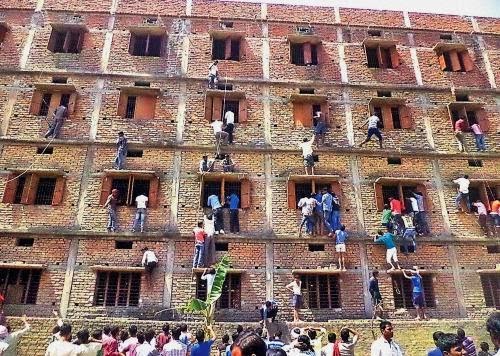 I told y'all about the parents of 10th-grade students who climbed the wall of their school in Bihar to help them cheat on their exams. Well, 600 of the students have been expelled. Bihar education authorities announced today in a statement. They said students caught cheating could be barred from taking the exam for up to three years, ordered to pay a fine or even sent to jail but no student on record has ever been sent to jail in the city for cheating.

About 1.4m 10th graders are taking the tests at more than 1,200 high schools across the state. The students must pass the exams to continue their education and that's why their parents are so desperate.


"It’s virtually impossible to conduct fair examinations without the cooperation of parents," said P.K. Shahi, Bihar’s education minister. "It is not possible to monitor the 6 million parents and others who accompany the students to the examination centers."

Many students were caught cheating by education department officials supervising the examination. About 25 parents were also arrested after being caught helping their children. But were later released.The State education authorities later canceled examinations held at four centers after they received reports of large-scale cheating.
Posted by Unknown at 3/20/2015 10:57:00 pm