Sick! See the woman who cut and removed baby from 7-months-pregnant victim's womb 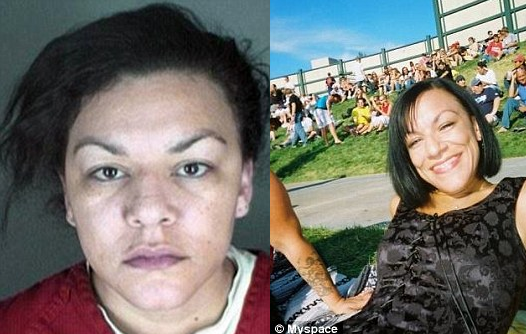 This story has shocked the world..A pregnant woman was left fighting for her life after she responded to a Craiglist to ad for baby clothes ..
The seven months' pregnant woman had her unborn baby cut out of her womb by a mother-of-two after she went to her home.Dynel Catrece Lane, 34, allegedly stabbed the 26-year-old in the stomach and pulled out the baby, killing the fetus in the process.
Police rushed to the scene after reports of a stabbing attack in Longmont, Colorado at 2.30pm on Wednesday and could hear the victim calling for help inside the home.The victim was taken to Longmont United Hospital where she underwent surgery and is expected to recover. The baby did not survive the attack.Longmont police Cmdr Jeff Satur told Daily Mail Online that the female suspect was taken to hospital by her husband.Lane was reportedly carrying the victim's dead baby and telling hospital staff that she had suffered a miscarriage.ABC7 reported that the husband believed his wife had suffered a miscarriage. Police would not comment on whether the suspect had recently been pregnant.Public records revealed that Lane is a certified nurse aide.  KDVR reported on Wednesday that a baby registry was set up in Lane's name last year and listed her due date as November 14, 2014. After speaking to the victim, police were able to arrest Lane at the hospital at 7.46pm on Wednesday.
Posted by Unknown at 3/19/2015 10:43:00 am