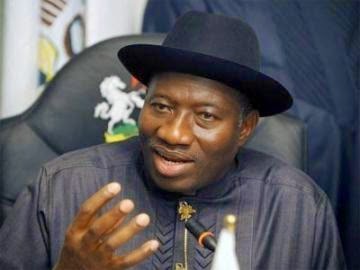 The Presidency has reacted angrily to an allegation by the All Progressives Congress that President Goodluck Jonathan’s visit to Lagos on Thursday was part of a plot to rig Saturday’s gubernatorial election in the state.
The APC’s spokesperson, Lai Muhammed, had on Friday said that Mr. Jonathan visited the nation’s commercial capital to fashion ways of rigging the election in favour of candidates of the Peoples Democratic Party.
But in a swift reaction, the Special Adviser to the President on Media and Public Affairs, Reuben Abati, said the allegation was wrong.


“Lai Muhammed is wrong to say that the President came to Lagos to rig the gubernatorial and state house of assembly elections scheduled for Saturday, April 11,” he said.
“He is of course lying as usual; and rude. President Jonathan visited Lagos. He arrived on Thursday and left on Friday. People visited him. So what?
“Anytime the president is in Lagos or any part of the country, a lot of people come to pay homage to him. Nothing unusual happened during his last visit to Lagos.
“Senator Musiliu Obanikoro’s visit to the president in Lagos is not something that anybody should use to play politics. Koro is a minister of the Federal Republic. He came to see his boss.”
Apart from Mr. Obanikoro, he said Messrs Jimmy Agbaje and Gani Adams, among others, visited the president while in Lagos.
The presidency wondered why Mr. Jonathan’s visit to Lagos which is a part of Nigeria, and the visit of PDP members to the leader of their party, should become an issue.
It argued that Mr. Jonathan never summoned or held meetings with officials of the Independent National Electoral Commission, the police, polling officials or persons involved in the conduct of the anticipated election.
“So to say that the president went to Lagos to supervise the rigging of Saturday’s election is most uncharitable and cruel,” the presidency said.
Even before the result of the presidential election results were declared by INEC, the presidency said Mr. Jonathan called the President-elect, Muhammadu Buhari and congratulated him.
The presidency said the world has continued to commend Mr. Jonathan for conceding defeat, which it said saved Nigeria.
It said the action exemplified the president’s sportsmanship, statesmanship and leadership at a very critical moment.
Besides, it said Mr. Jonathan has demonstrated commitment to free and fair election, the rule of law and due process, thereby showing character, honour and integrity.
The presidency noted that Mr. Jonathan has left a worthy legacy, adding that the APC spokesperson and his masters were wont to taint the legacy by cooking up meaningless tales.
“Lai Muhammed should look for another target and leave the President alone. His fatuous tale does not make any sense.
“I repeat: We will like to advise that the APC should just leave the President alone. President Jonathan was a candidate in the presidential election; he did not rig the election. Why would he want to rig tomorrow’s elections?” the presidency asked.
The Peoples Democratic Party had earlier condemned the APC’s allegation, wondering why the party should accuse the president when the president-elect, Mr. Buhari, who is its leader, had visited several states to support APC’s governorship candidates, without anyone accusing him of plotting to rig elections.
Posted by Unknown at 4/10/2015 06:58:00 pm