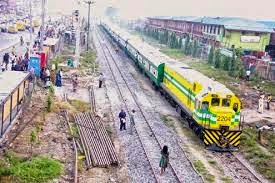 An unidentified young man with earphone on, was killed this morning April 8th by a passenger train at Cappa area of Oshodi, Lagos.

A Correspondent of the News Agency of Nigeria (NAN) who was inside the train reports that the man was standing on the rail track oblivious to the fast approaching train. The NAN correspondent reports that the Ogun-Lagos-bound mass transit train was leaving its Oshodi station to Mushin when the accident occurred.
The train had as usual, sounded its horn repeatedly as it was approaching the railway crossing at Ilupeju Bye-pass for clearance of its track.

According to an eyewitness, the man who had his earphone on was apparently carried away with either the call he was receiving or listening to music.

Obviously the man was not aware of the approaching train even as it blasted its horn, perhaps because of the earphone. Before he knew it, he was already hit by the train and was not given any chance to escape. Immediately he was hit, the body was mangled as the train dragged it underneath,’’ the eyewitness said.

NAN reports that people standing by the rail track that saw the incident raised their hands over their heads in a show of pity for the deceased.

"The man has suddenly and unwittingly lost his life to sheer carelessness,’’ a passenger said.

NAN reports that it was not the first time a moving train would crush to death people standing on the rail track because of having their earphones on.
Among them was a lady in 2006, killed at Shogunle GRA railway crossing, while another one was killed in 2007 at Oshodi.