EFFC To Arrest Controversial Father Mbaka, Freezes All His Accounts 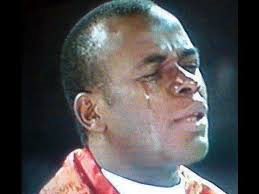 The Economic and Financial Crime Commission (EFCC) has frozen all accounts of controversial,  Enugu based reverend father Ejike Mbaka,
According to a source who was present at Mbaka’s Wednesday adoration Mass for the sick and needy, the reverend while giving his sermon narrated to his congregation how he went to withdraw money to buy food items for the poor masses that moved down from north Because of the election, but to his surprise his cheques were returned. When he enquired why he could not make any withdrawals, he was told EFCC has directed his accounts to be frozen. He stated that the commission is also inviting him to EFCC office in Port Harcourt for questioning.

The Reverend guessed the order may have been from President Goodluck Jonathan to cripple his activities during the elections that is coming up this weekend.
He further stated that he is not scared but in order to cautious and not fall victim of assassination, he will not honor the invitation from EFCC. “They have threatened to arrest me at the cathedraticum which will take place at holy ghost cathedral, Enugu. I won’t fail to be there on Friday” he said

The source who gave his name as Benjamin disclosed that President Goodluck is lucky that it is just one day to the election before the EFCC issue with father Mbaka cropped up. “the situation Would have messed him up.”, the source added.

Another ardent follower of the popular Mbaka adoration confirmed the story. But we could not get the father to confirm the story himself.
Posted by Unknown at 3/26/2015 07:58:00 pm