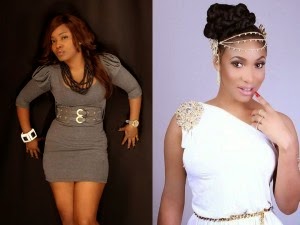 In his usual fashion, the amebo controversial singer and writer, Etcetera has taken shots at Tonto Dikeh and her former BFF, Halima Abubakar. Etcetera said Tonto and Halima ended their relationship because of a juju priest. Read what he wrote below: – “Our nollywood sources tell us, that Halimah Abubakar and Tonto Dikeh who used to be good friends, fell out because of a juju priest — It is said that Halimah, took Tonto to sample the powers of her juju priest who got encharmed by her looks and preferred working for her instead of his usual customer, Halimah.” “Halimah could not stand the fact that she got sidelined by her own juju priest and asked Tonto to stay the hell away from her for good.
A staff of Etcetera Live called Halimah at about 2PM yesterday (Friday) to confirm the story but she demanded for a text message to be sent to her instead. Further attempts to reach her proved abortive until about 11:32PM when she finally picked and said in her own voice, “this is Halimah’s PA, she will get back to you later.” “Hmmmm, so na juju separate the 2 of dem? No wonder dem no gree tell us wetin really happen between dem. Breeze don finally blow fowl yansh ooo. Same sources told us that Tonto does not like tattoos; she uses them to mask incisions gotten from her visits to her juju priest”.
Posted by Unknown at 3/27/2015 03:50:00 am