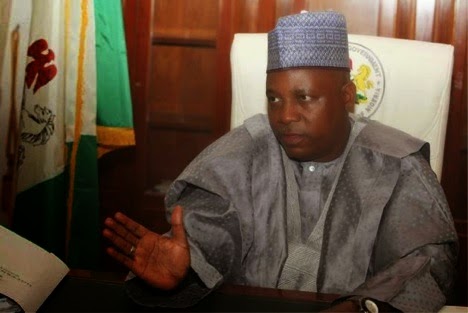 The Governor of Borno state Kashim Shettima says the towns and villages liberated by the Nigerian military is still not safe and habitable as there are still pockets of Boko Haram members in some of the villagers. The Governor said this in a statement released today where he spoke against the immediate return of villagers living in various IDPs back to their villages for election.

He said that would expose the villagers to another attack which would mean sacrificing them on the altar of politics. Excerpts of the statement signed by his spokesperson, Isa Gusau after the cut...

The voters are the same whether they vote in local government areas or anywhere else. However, I think it will be irresponsible on our part as a government to hurry our citizens back to liberated communities now mainly to go and vote because that will be very callous. We have pockets of insurgents in some villages, we have had attacks that are very recent on some routes, we all know that these liberated communities are still not fully safe and habitable.

The military has recaptured lost territories but we have one or two to go. Then, some insurgents fled to villages and they are still posing problems, how safe will our people be if we force them back today? How safe will it be to send people to Gamboru, Baga, Monguno, Malamfatori, Kala-Balge, Mafa and other places. What about the issue of landmines possibly planted there that everyone knows the military has been contending with? All those politicians that stay in Abuja and cause all manner of confusion for Borno, if they are so certain that liberated communities are now safe, let them go and live in Gamboru like ordinary people.

Why have they moved their entire families including their cats out of Maiduguri that is relatively safe not to talk of the local government areas? Why do they want our citizens to go to liberated communities and put their lives at risk knowing fully well that there is so much to be done. Apart from the issue of safety, there are decomposed bodies, we need to do so much fumigation and environmental cleansing, we need to rebuild homes destroyed, markets, schools, hospitals, many have been destroyed, we need to fix things because our citizens are human beings and they deserve to be treated as such.

Why should we push our citizens to live where we can’t send our wives and children to live? We are concerned about our people, we cannot allow them take unnecessary risks. We are confident all will be well eventually insha Allah but we need some careful planning. We want to set up a Task Force on Evaluation, Reconstruction, Rehabilitation and Re-integration of Victims of the insurgency and the task force will have representatives of all stakeholders.

It will be a multi-faith and multi-ethnic based so that every segment of the affected population is covered be it citizens, associations, government or institutions from security to all others. We have a serious work before us, it is not child’s play that some people are advocating for mainly for their selfish and dehumanizing interests. We must learn to put politics aside where the existence of our citizens are involved. Power should not be our only concern at all points. There is more to life than desperation to access power.”