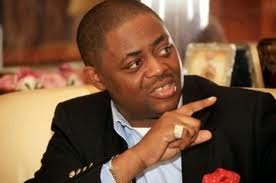 A former Minister of the Federal Capital Territory, Adamu Aliero, on Tuesday called on security agencies to arrest Femi Fani-Kayode, the director of publicity of the Peoples Democratic Party Presidential Campaign Organization, for falsely claiming that the PDP had won the presidential election in 23 states.
Mr. Aliero made the call while responding to questions from journalists in Birnin Kebbi, the Kebbi state capital, on his victory at the senatorial election in the state.
Mr. Aliero was the candidate of the All Progressives Congress for Kebbi Central Senatorial District.
Mr. Aliero said it was reckless and irresponsible for Mr. Fani-Kayode to have made such a “stupid statement”.


“Fani-Kayode is supposed to be arrested because such people can cause mayhem in this country,” the former minister said.
He urged Nigerians to ignore such inflammatory statements because they could cause crisis in the country.
He said the only body empowered by the Constitution and Electoral Act to declare election result is INEC.
“Where you have two results being released, the INEC one and that of the fraudulent one by so called Fani-Kayode with the intent to rig the election, there can be confusion.”
He said the introduction of Card Readers by INEC in the conduct of elections is a revolution.
“It has completely eliminated electoral fraud. This is because previous elections were marred by election fraud,” the Senator said.
He expressed satisfaction with the conduct of election in the state and called on INEC to retain the use of Card Reader and if possible, improve on lapses recorded during the presidential election.
He expressed appreciation to God and the people of the state for his reelection to the Senate and for their support throughout the electioneering campaign.
“We were in PDP just about four months ago and all of a sudden we changed to APC because of injustice manifested throughout the conduct of primary election in Kebbi State,” he said.
He promised to do his best in giving his people robust representation at the Senate.
Posted by Unknown at 4/01/2015 03:38:00 am