Man arrested in Lagos for killing student over girlfriend 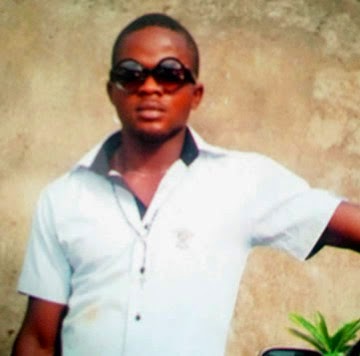 A 38 year old car wash attendant Monday Ekwekuba, an indigene of Imo State, has been arrested by the Lagos state Police command for killing 26-year-old student Wisdom Okafor pictured above in the Ojokoro area of Lagos State following a disagreement over the victim's closeness to his girlfriend.
Punch reports that the suspect Ekwekuba had visited his girlfriend on March 22nd and met Wisdom in her house. He accused the deceased of having an affair with his girlfriend and out of anger, picked up a stick and smashed it on Wisdom's head who took to his heels but unfortunately ran into a moving vehicle where he was crushed to death.
According to Daniel, the victim's younger brother, he said his brother became friends with the lady in question after he mistakenly dialed her number. He said they were never dating

“It was after he mistakenly dialled her phone number and they spoke that she invited him to her apartment and that was how they met. He later saw her in a nylon company where he was working to raise money for his exams. She was also working there. She was older than my brother and there was no way they could be dating,” he said.
Also speaking on the incident, his elder brother, Celestine said "On Sunday, March 22, around 10.30pm, the police came with a lady to my house and asked for my brother. They said he was involved in a fight and had injured a man named Monday (Ekwekuba), who had been hospitalized.  I told them my brother went out to see a friend and had yet to return to the house. They said they would arrest me until I was able to produce my brother. I was detained and later they asked me to pay N10, 000 for Monday’streatment, which I did. They then asked how I would produce my brother, and I decided to call him in their presence. His phone started ringing in the pocket of one of the policemen. The officer said the phone belonged to the man in the hospital, who had just died.”
Police reports say the girl in question later confessed that her boyfriend pursued the victim to his death. The suspect went into hiding after the incident but was later arrested.
Celestine has made a plea to the police to release his brother's body for burial “Our mother is late and our father is in the village in Enugu. He is sick, and I cannot inform him of the death of our brother because I don’t know what can happen to him. My job has been at a standstill and they should please release the corpse to us so I can go and bury him and move on" he said. The police however say they would release his body after they receive the autopsy result on his corpse.
Posted by Unknown at 4/06/2015 06:45:00 am