Mimiko Is A Dictator In Ondo State, He Ruined PDP- Ali Olanusi 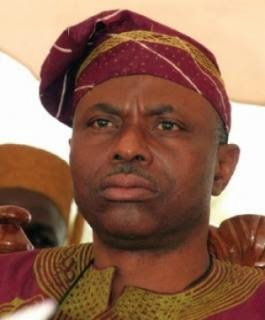 The Deputy Governor of Ondo state, Ali Olanusi has described the embattled governor of the State, Olusegun Mimiko has a “dictator” and “emperor” who always want to be in charge of virtually everything in the State.
Speaking exclusively with SaharaReporters reporters in Akure, Ondo State Olanusi said he decided to break his silence after weeks of fallout from the camp of Governor Mimiko.
He already predicted that things would still fall apart in days to come for the Peoples Democratic Party (PDP), as loyalists to Governor Mimiko would begin to defect to the APC.
He disclosed that the Governor, who has always flaunted his impunity with pride, has been controlling the wealth of the State by becoming a “roaring emperor” without recourse from the public.


The Deputy Governor said he left the PDP for the APC in the State because he was no longer confortable with the dominating style and injustice initiated by the Governor in the party.
He said, “Governor Mimiko said I am no longer useful to him and I decided to pitch my tent with the All Progressives Congress party where I will be useful.
“For a very long time he (Mimiko) has been a dictator and he has become an emperor. He doesn’t consult anyone. He is in charge of everything. Nobody can advise him. He doesn’t listen to anybody. He does things alone”, Olanusi said.
He told SaharaReporters that he was never carried along in the defection ring purportedly orchestrated in Abuja by the Governor, adding that he received no calls or notification on such action when he was the Deputy Governor of the State.
“When he went to Abuja where he defected from the default Labour Party (LP) to the Peoples Democratic Party (PDP) in the State, he refused to carry me along or inform me about his decision.
“It was when things got worst for him that he remembered to make me the Chairman of the Reconciliatory Committee of the PDP for the aggrieved members in the state
“He went to Abuja. He started preparing for the election and they gave him money but he didn’t tell me anything, not to talk of how much he was given for the election”, he said.
Mimiko always want his orders carried out and be worshipped without being challenged, Olanusi also added.
He berated the dominance and tyrannical government of the Governor in the State by turning the whole Ministry into a household and family business affairs.
“Even I can’t nominate who would be an ordinary local government councilor not to talk of Chairman in my ward. He is all in all and always dictates.”
“There is no single portion in the Ministry or MDAs in the state that I am controlling, but the governor is virtually in charge of ‘everything’ including the entire department in this state”.
Olanusi authoritatively revealed to SaharaReporters that the governor was the brain behind the sinking architects which tore the umbrella of the Peoples Democratic Party in the State chapter into shreds, thereby forming parallel executives and members.
He revealed how Mimiko colluded with some PDP political juggernauts in Abuja by bribing them with the State tax payers fund to destroy the State chapter of the Party and single handedly pick its own new candidates, without regard for old members of the Party.
“The Peoples Democratic Party (PDP) National Working Committee (NWC) ruined the chapter of the party in this state by conniving with Governor Olusegun Mimiko to throw the ethics of democracy into the dust bin.
“He went to the national headquarters of the Peoples Democratic Party in Abuja and gave money to the National officers to drop the authentic candidates (old members) that pass through the primary elections of the party before emerging as the party’s candidates.
“Imagine, a sitting governor single-handedly selected the party’s candidate that who represents the whole 26 constituency seats of the State House of Assembly.
“He also hand picked all the candidates of the National Assembly which includes the 9 House of Representatives and 3 Senates seats of the State”, he said.
The Supare Akoko born politician, who also revealed how the Governor has been witch-hurting him since his defection to the All Progressives Congress in the State, added that all his security aides have been withdrawn.
He added that the State Commissioner of Police, Isaac Eke acting under the instruction of Mimiko has impounded all his official vehicles and a stop to the allowance of his domestic staffs and aides.
“Let me tell you, the Governor has perpetrated many illegal things. Already, he has withdrawn my security aides through the Commissioner of Police (CP) and the Deputy Commissioner of Police in Charge of Operations.
“They all connived together and withdrawn my security aides starting from my Aide De Camp downward.
“Mimiko ordered for the seizure of all the government officials vehicle in my care and department as the deputy governor.
“They even came to pack them all, and he also barred me from entry the government office and house and all my political associates have been warned through the Chief Security Officer (CSO) not to be seen in the state government house again”, he said.
Our crew reported that Deputy Governor has moved down to his Supare Akoko hometown where he is currently being welcome by supporters and family members.
Posted by Unknown at 4/05/2015 12:43:00 pm