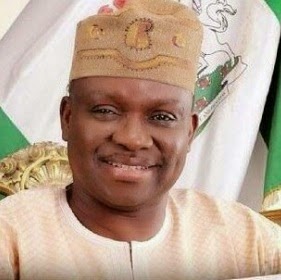 Accusing Governor Ayodele Fayose and the Police of complicity in the attack, APC Publicity Secretary for Ekiti State said the party had earlier got information that plan was being hatched by some top officials in the government house to prevent any celebration in the state.But Fayose said the attack was a self-sponsored attack by the APC to make it look like an attack from outside, urging the people to disregard the allegations.
Crisis returned to Ekiti State on Wednesday as gunmen attacked the All Progressives Congress Secretariat and jubilant members of the party.
The APC members had just returned from the streets of Ado Ekiti where they had gone to celebrate the victory of the APC candidate, Maj. Gen. Muhammadu Buhari (retd.), in the Saturday’s Presidential election.


The state Publicity Secretary, Taiwo Olatubosun, who addressed journalists in Ado Ekiti after the attack, said the gunmen came in three Hilux vans with Government House number plates with three men in Police uniform sitting in the front.
Accusing Governor Ayodele Fayose and the Police of complicity in the attack, he said the party  had earlier got information that plan was being hatched by some top officials in the government house to prevent any celebration in the state.
He alleged that the gunmen were members of a killer gang sent to disrupt the APC victory party by the governor.
But Fayose said the attack was a self-sponsored attack by the APC to make it look like an attack from outside, urging the people to disregard the allegations.
Olatubosun wondered why the hoodlums attacked the Secretariat unchallenged in the presence of a detachment of police led by the Divisional Police Officer of the Ologede Police Station, Ado Ekiti, that had provided security for the victory party.
According to him, the gunmen brandishing guns, cutlasses and axes, rained bullets on the secretariat and destroyed no fewer than five cars parked at the secretariat.
Olatunbosun mentioned Femi Ogunleye (aka Akilapa), Basiru Ajagbe, Ayo Terrorist and Opeyemi Atiaro as the leaders of the attack.
The intensity of the attack, he said, forced party members and passers-by to scamper for safety.
“We had few members left when they came because some of our teeming members who held a peaceful victory procession were already leaving before they came. They shot at our secretariat.
“We were aware that they were coming but we never knew Governor Fayose could do anything funny because of the mood of the nation, though, we heard him boasting that he won’t allow anyone to mark the victory of Buhari in Ekiti State,” he said.
But the Commissioner of Police, Taiwo Lakanu, while denying that Police supervised the attack said the timely response of his men led by the Area Commander saved the situation.
“We received information that there was an attack on APC secretariat and I deployed a team there led by Area Commander. They succeded in flushing out the miscreants.
“We are still making effort to arrest the miscreants. We have information on those who perpetrated the act. Our timely arrival scared away the miscreants. I am telling you categorically that my men will never be involved. That is a mere exaggeration. Ologede DPO was not there.”
Reacting, Fayose through his Chief Press Secretary, Idowu Adelusi, in a statement said he did not send anybody to attack the APC and had never done such a thing in the past.
The statement read, “The APC in their usual character have piled up strategies and as well more than 20  lies of various? degrees which they had planned to execute on daily basis to cause commotion in the state if General Buhari wins the election.
“One of such lies is this allegation of attack which in actual sense they planned and executed by themselves to make it look as if they were attacked by outsiders.
“The Governor does not operate or  have any killer gang as they had alleged, rather, it is the APC’s killer gang which was set up and funded by Fayemi’s administration and headed by Deji Adesokan that has reappeared again in the state, and we are urging the police to be on their trail before they wreck havoc.
“This killer gang which killed not less than 10 people when Fayemi was in government, relocated outside the state after that ?administration was ousted. Ekiti state has been peaceful since then. We are aware of their sinister plans to ? cause crisis in the state and they have started by invading the State House of Assembly today.”
It further said, “If the APC is sure of the attack, it should report that to the police. We are again informing Ekiti people of the evil plans by the APC to plunge the state into another crisis and stand up to defend this government, defend the mandate you have freely given to Ayo Fayose.
“We also appeal to the police and other arms of the security agencies to maintain law and order, protect lives and property and never allow any hoodlum to turn this state into another theatre of war.”
Posted by Unknown at 4/01/2015 07:35:00 pm