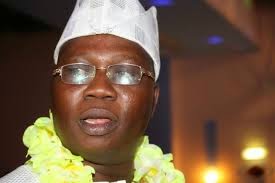 
“I commend his resilience and tenacity over the years which have seen him equal the record of great leaders like Abraham Lincoln of the USA. His victory is a lesson to all of us that we can be what we want to be if we are patient and persistent in our legitimate pursuits in life”.
“His speeches before, during and after the election are also commendable because they went a long way in dousing the tension in the country.
This actually shows that the ‘Peoples General’ as he is fondly called is indeed a statesman’.
The Congress leader called on Mr. Buhari to begin to see himself as the president-elect of all Nigerians and not just that of the All Progressives Congress.
“However, having won the election, I want the president-elect to begin to see himself as the president-elect of all Nigerians and not just that of the All Progressives Congress (APC). For him, it is time to mend whatever differences that may have arisen as a result of the election.
“It is time for all Nigerians, irrespective of political affiliation, to come together to continue to build our nation in a positive way, which of course, should be the focus of the president-elect himself and every other political leader across the various political parties in the country”, Mr. Adams said.
“And for all of us, it is a new dawn in the annals of the country for an opposition party to win in a popular election.
Mr. Adams also congratulated President Goodluck Jonathan for creating a level-playing ground for all the parties that contested the election and the high spirit of sportsmanship he displayed when he called to congratulate the president-elect even before all the results were released.
“By his action, President Jonathan has truly lived up to his statement that his ambition is not worth the life of any Nigerian. This is an exemplary feat, which any other presidents coming after him must not fall short of achieving.
“And to all Nigerians, who by their participation in the election also deserve kudos as they defied the weather, distance and other hurdles to cast their votes. Their actions have revealed that democracy in the country has come to stay”.
“I urge them not to rest on their oars as their consistency in holding leaders accountable to their promises will go a long way in bringing out the best from the public office holders.
Mr. Adams was among notable personalities in the South-West opposed to Mr. Buhari’s election.
Shortly before the election, he organised a pro-Jonathan rally in Lagos which turned violent.
He promised to deliver six million votes to Mr. Jonathan, but he was unable to do so.
Posted by Unknown at 4/01/2015 07:31:00 pm