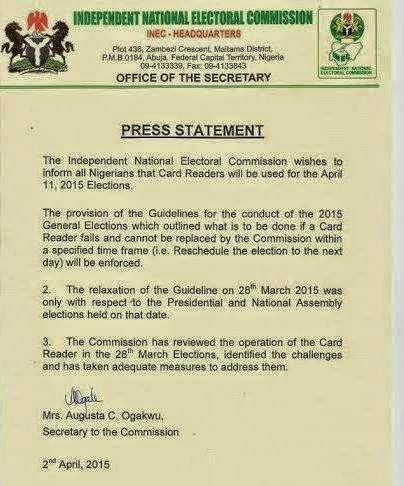 Independent National Electoral Commission has issued a press statement to clarify on the ongoing rumour of whether card readers will be used in the upcoming Governorship election. Statement below

The Independent National Electoral Commission wishes to inform all Nigerians that Card Readers will be used for the April 11, 2015 Elections.

The provision of the Guidelines for the conduct of the 2015 General Elections which outlined what is to be done if a Card Reader fails and cannot be replaced by the Commission within a specified time frame (i.e. Reschedule the election to the next day) will be enforced.

2.      The relaxation of the Guideline on 28th March 2015 was only with respect to the Presidential and National Assembly elections held on that date.

3.      The Commission has reviewed the operation of the Card Reader in the 28th March Elections, identified the challenges and has taken adequate measures to address them.